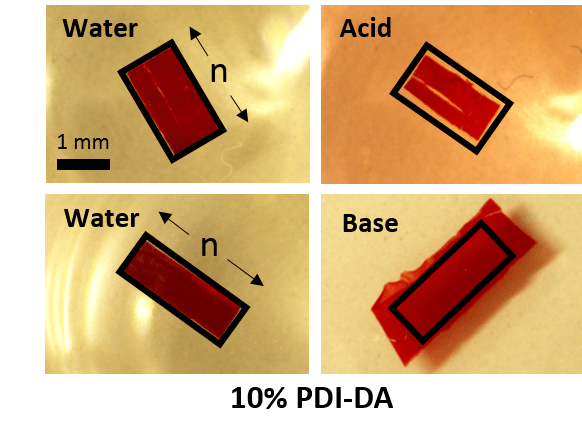 In the field of biosensors, artificial muscles and microfluidics, shape-morphing hydrogels are of significant interest. Isotropic materials can be morphed into complex shapes under aqueous stimuli by varying the material (embedding with stiff particulate such as carbon nanotubes for example) or the processing (angled lamination). While the challenge exists to create and control such hydrogels at a micro-size, Taylor Ware and his team at the University of Texas at Dallas have successfully created anisotropic hydrogels by polymerizing oriented chromonic liquid crystals. In  this paper, the team demonstrated control over magnitude of shape change, stimulus to which the gel responds, and complexity of the liquid crystal orientation.

Key to these anisotropic hydrogels is the patterned order imparted by chromonic liquid crystals. This patterned order was quantified by testing the axis-dependent mechanical properties, which is a difficult task in thin, compliant hydrogels. The team used the CellScale MicroTester with a temperature-controlled water bath setup to measure and subsequently derive the Young’s Modulus.

Stimulus in this experiment were pH and temperature, as determined by the choice of responsive comonomer. From the image below, approximately 70% and 50% dimensional changes are seen perpendicular to the alignment direction versus along the alignment direction in response to increased temperature. Varying the pH from acid to base saw approximately 100%/80% dimensional change (image above). Leveraging this knowledge, the team went further to create a microstructure that would exhibit positive or negative Gaussian curvature in response to certain conditions. 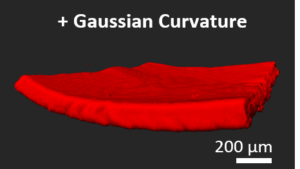 To read about a research on biomechanical impact of localized corneal cross-linking, click here.