A Bioink Blend for Rotary 3D Bioprinting of Vascular Constructs 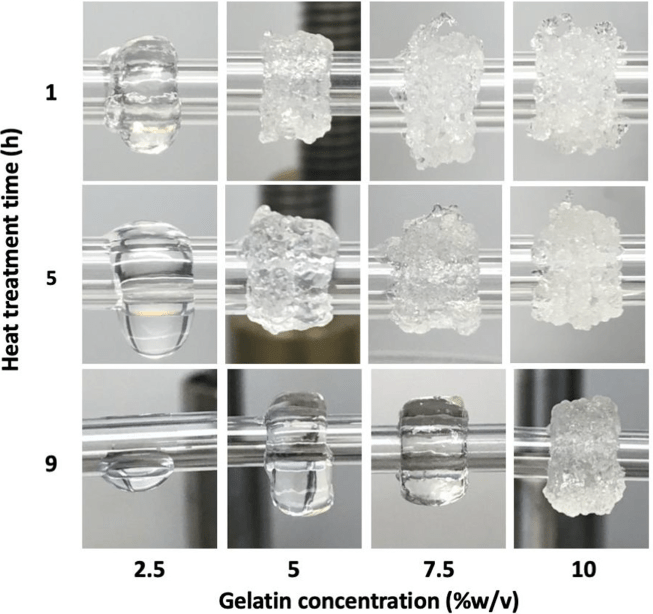 Synthetic grafts have been used since the 1970s to treat cardiovascular diseases. Although autologous arteries or veins are preferred, conditions such as low patency rates and compliance mismatch tend to lead to graft failure. Tissue-engineered vascular grafts (TEVGs) formed by culturing cells in vitro to produce an in vivo burst pressure and extracelular matrix (ECM) composition similar to autologous grafts are widely being considered as a viable alternative. While there are several methods to create TEVGs, Dr. Kaiming Ye and his team at Binghamton University and Syracuse University present in this paper a novel bioink for biofabricating TEVGs using an in-house developed rotary 3D bioprinter.

Fibrinogen is a suitable biomaterial for constructing TEVGs because it promotes de novo collagen synthesis, however its low viscosity makes it unfit for 3D bioprinting. By incorporating gelatin into the fibrinogen bioink, the team improved its printability. Varying heat treatment time also altered the bioink’s rheology – it was observed that under a certain concentration of gelatin, the storage moduli and viscosity decreased significantly with extended heat treatment time.

Upon successfully printing TEVGs with a three-axis rotary 3D printer, tensile measurements in the radial and circumferential directions were performed with the CellScale UStretch. Elastic modulus and ultimate tensile strength increased with time of culture as can be seen in the graphs below. The paper further discusses the effects of other variables (thrombin concentration and cell concentration), SEM images, and details of various components of their developed 3D printer.