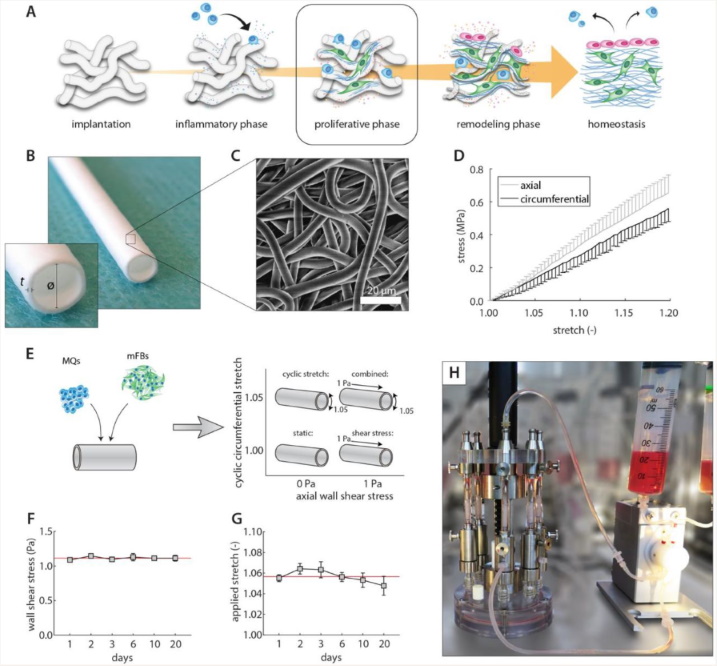 Resorbable synthetic scaffolds work to encourage tissue regeneration by allowing immune cells (e.g., macrophages) to infiltrate and attract tissue-producing cells that deposit new extracellular matrix (ECM). The deposited tissue is then remodeled to possess native-like structural and functional properties while the scaffold slowly degrades. However due to a mismatch between scaffold properties and its eventual mechanical loading, issues such as early stenosis and aneurysm occurs. Dr. Carlijn V. C. Bouten and her team at the Eindhoven University of Technology sought to uncover the underlying mechanism behind premature graft failure by creating a model that mimics the transient local inflammatory and biomechanical environments that drive scaffold-guided tissue regeneration. In particular, they looked at the mutual roles of physiological levels of shear stress and cyclic stretch on macrophage/fibroblast-mediated neotissue formation.

For their experiment setup, the team used polycaprolactone bis-urea (PCL-BU) which was electrospun into vascular scaffolds. The CellScale BioTester measured the stiffness through biaxial tensile testing prior to seeding them with human primary monocytes and (myo)fibroblasts. Next, they were cultured under healthy levels of shear stress for 20 days in their custom-built bioreactor before they were analyzed. The image above nicely summarizes the setup and initial results.

One interesting discovery in the paper was that shear stress played a role to reduce the increased stiffness of the scaffolds caused by cyclic stress. The graphs below highlight the Elastic Modulus in the axial and circumferential direction of the scaffolds. The combination of shear stress and cyclic stress produced a specimen with negligible change in stiffness when compared to a static model.

To read about axial torsion on the annulus fibrosus, click here.