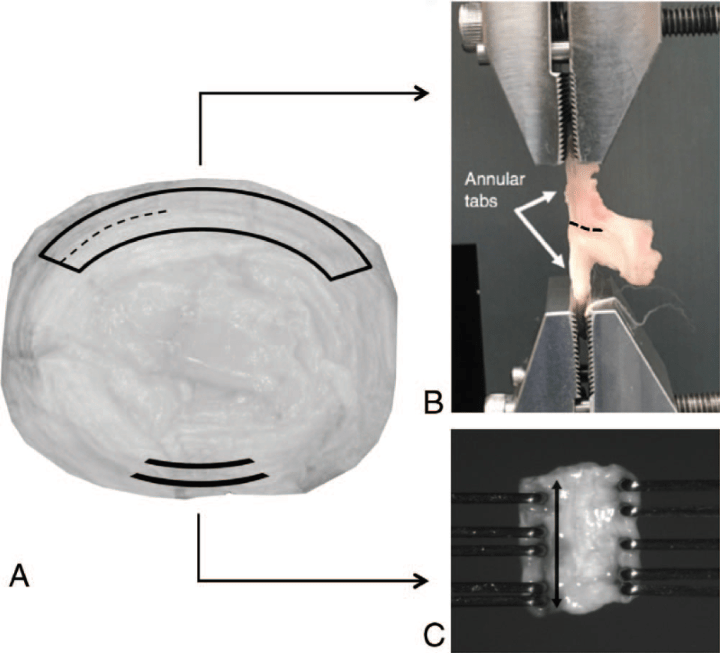 The intervertebral disc (IVD) is made of an inner nucleus pulposus and a surrounding annulus fibrosus (AF). IVD herniation occurs when the inner nucleus pulposus breaks through the layers of AF, and is associated with both spinal rotation and repetitive flexion. However an explanation of the details of tissue mechanism in play is lacking. Dr Diane Gregory and Maxine Harvey-Burgess from Wilfrid Laurier University aim to bridge this knowledge gap using cow tail IVDs subjected to static axial torsion and tensile testing. Their study also included histological staining that clearly showed torsion resulted in disruption of the AF.

The key finding of this work was that axial rotation did not affect the adhesion between layers of the AF but rather disrupted the layers themselves. Therefore, this work indicates that annular layer disruption is one of the key mechanisms of increased risk of herniation with axial torsion.  Although there were limitations in their research such as how bovine IVD may have different torsional distribution than the human IVD, this paper shed light on AF microstructures under mechanical stress and how they eventually lead to IVD herniation.

In their experiments, the CellScale BioTester and UStretch were employed for biaxial and uniaxial tests respectively. The image above shows a T-peel test and a tension test of the specimen, along with tissue sample locations within the IVD.